The only reason I’m posting this is because maybe there’s someone else out there who needs super easy dinner ideas.  It won’t work for a last minute meal because it takes over an hour to bake.  That’s because you do not have to pre-cook the noodles!  This is the most non – technical, adaptable, semi home made recipe I’ve ever posted.  It’s really just a method of assembly.  Simply layer everything in a casserole and bake, hooray!

The quality of your ingredients still matter in this easy dish, so look for organic tomato sauce that doesn’t have added sugar.  I chose to use organic cheeses as well.  The ground turkey makes it a little lighter than beef lasagna, but it’s still kinda heavy for the middle of summer.  Cucumber and Avocado Salad is a nice cooling side dish, click here for recipe. 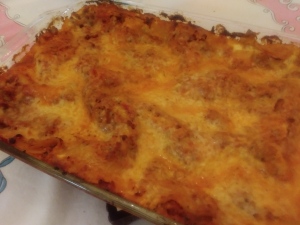 I’m feeding a growing boy and he’s HUNGRY and this got very positive reviews.  It was originally a Spinach Lasagna recipe, but I was afraid my boy wouldn’t eat it unless it was meaty and not veggie.  If you’d like the original recipe, just email me.

This is a beautiful bread filled with cream cheese, jam and fresh fruit.  The recipe is much easier than it looks, and it’s super delicious. Nothing beats blackberries in the summertime, so I walked along the pasture fence picking until I had more than enough for a baking project.  I used raspberry jam and flavored the cream cheese with lime zest and juice.

If Walkaway seems like an odd name for a cream cheese and fruit filled bread, click through to The Italian Dish blog and read about its origins.  I’ve made it several times over the years and am always pleasantly surprised at how simple and adaptable it is.  I made a few changes to the recipe this time, leaving the dough a bit leaner and healthier while bumping up the cream cheese and fruit.

Adapted from The Italian Dish

I make the dough in my bread machine because I can walk away from it and let the machine slowing mix and knead everything.  However, you can use a stand mixer.  Place the 1/2 cup whole wheat flour, 1 cup flour, sugar, salt and yeast in the mixing bowl and attach the dough hook.  Mix until combined, then gradually add the liquids and butter.  Add the remaining flour until the dough clings to the hook and cleans the sides of the bowl.  Add just enough to form a soft ball – you may have to add a little less or a little more flour.  Knead for about 5 minutes.  Place in a greased bowl and cover.  Let rise until doubled in bulk, about 45 min to an hour. 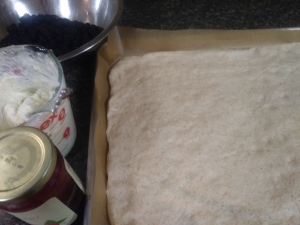 Line a baking sheet with parchment paper and add just a teaspoon of oil to spread around with your hands.  This will help with any sticky issues in the next step.  When the dough is ready, punch it down and place on the oiled paper with your oiled hands.  Spread the dough to fill the pan completely and evenly.  I did this just with my hands, but you could use a rolling pin.  Mix the cream cheese, sugar, lime juice and zest in a small bowl.  Spread the cream cheese mixture down the middle of the dough in about a 4 inch strip, leaving an inch of dough at both ends.  Next, gently spread on the jam and then top with the fresh blackberries.  To  make the beautiful folded top, use a sharp paring knife to cut diagonal strips down the sides of the dough.  Make two cuts on each end to make the end flaps.  Fold the short end flaps over the filling and then start folding the strips over, alternating from side to side.  Trim away any excess dough when you’re done.  Cover lightly and let rise for about 40 minutes.

Bake at 375 for about 25- 30 minutes, until golden brown.  Serve for breakfast, second breakfast, elevensies, or a snack!  The zing of lime zest and punch of raspberry jam are fantastic. 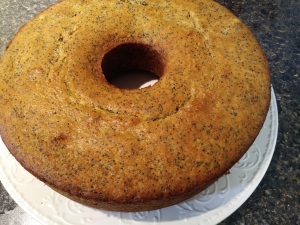 This is a lemon poppy seed cake with emphasis on the poppy seeds.  It’s practically health food because poppy seeds are high in dietary fiber and minerals.  With three eggs, plus the additional nutrition from all those seeds, this cake is solidly in the ‘okay for breakfast’ category!

I  found this recipe in one of my favorite vegetarian cookbooks, The New Moosewood Cookbook by Mollie Katzen.  I love her handwritten recipes, doodles and drawings.  The recipes are delicious and healthy without sacrificing richness and flavor.

zest and juice from 1 lemon

This cake has so many poppy seeds that it’s almost nutty tasting.  It’s a little different from your average lemon poppy seed muffin or cake, but still very familiar in flavor.  I love that it’s not super sweet, I also love the crunch of the seeds and the little hint of lemon flavor.  If you want more sweetness, you can add a simple glaze of lemon or orange juice mixed with powdered sugar.

French Macarons are one of my son’s absolute favorite treats.  Whenever we travel to a ‘big city’ and visit a bakery he always begs for one of the cute, brightly colored little sandwich cookies.  I’ve read quite a bit about these and how difficult they are to make, so I never bothered to try at home until last week.  Fortunately for me, I have been practicing all the necessary skills to make macarons for years so my first two batches turned out great!

After realizing that I do not have a cookbook with this recipe (!??), I visited my most trusted blogger for French desserts,  David Lebovitz.  He offered great advice, links, and a well tested recipe for chocolate macarons.  After success with chocolate I tried Martha Stewarts recipe for plain almond flavor.

I was nervous about how these delicate cookies would come together, so I pulled out my baking scale for accuracy and set to work.  You can click through for the recipes I used, but I will share a few things I learned.  First of all, it’s important to pulverize the almonds into a fine dust with the confectioners sugar.  I used my Nutri Bullet for this and it worked great.  Secondly, my scale came in very handy.  It’s difficult to get accurate measurements without weighing ingredients.  The more I practice baking with a scale, the easier it becomes.  It’s very satisfying to achieve such precision.  Third, making macarons is all about whipping the egg whites and your folding technique.  If you’re not comfortable separating eggs, making meringue, and folding delicate batters, then this might be a frustrating recipe to attempt.  A good tip which I didn’t come across until after baking is that the batter should be like lava; on reflection mine was a bit too stiff and that’s why the tops were not perfectly flat and smooth.  I did not aim for perfectly uniform size with my cookies and instead went free hand with the piping bag.  I made smallish macarons and thought they were just the right size for sharing and having more than one.  Lastly, please keep an eye on the oven as they bake.  Both my chocolate and plain macarons baked more quickly than I anticipated and I came close to burning them!

I’ve mixed up the photos from the plain and chocolate batches, but you can get an idea of the process.  I was pleased that my macarons achieved that cute little ‘foot’ and a shiny top.  You can also see the sort of belly button lumps on top of most of my cookies which as I learned was a result of slightly stiff batter.  I attempted to smooth the tops of some of the plain cookies with a wet finger, but got overzealous and ended up with some ugly tops as seen below.  They still tasted wonderful!  I filled the chocolates with raspberry jam and the plain almonds with vanilla buttercream.

For Valentine’s Day this year I made meringue cookies.  Although I’ve made meringue for pies many times, I had never made the cute little crispy cookies.  They were a total success and my son said they were one of the best desserts I’ve ever made.  Egg whites and sugar, what’s not to love?

About a week later I decided to explore vegan meringues.  I was aware of this as a theoretical possibility, but thought it was probably harder than it appeared.  Vegan meringue is made from aquafaba.  Aquafaba refers to the liquid from cooking any dried bean or legume. Beans leach proteins and carbohydrates into the water they’re cooked in, which transforms that water into a substance rich in those nutrients and ripe for whipping.  While aquafaba can come from canned or stovetop cooked beans, most aquafaba-based recipes call for the liquid from canned chickpeas.  This is because chickpeas are supposed to have a neutral flavor and reliably consistent starch content.  Okay, let’s see if the dessert made from chickpea water really tastes the same as delicious, marshmallowy meringue from egg whites.

For this recipe all you need is one can of chickpeas, cream of tartar, sugar and vanilla.  Sounds easy enough, and this will be another opportunity to practice my piping skills.

Recipe from The Kitchn – click through for more tips for success!

Liquid from one can of chickpeas – about 3/4 cup

Preheat the oven to 225 degrees and line 2 baking pans with parchment.

Using a stand mixer, beat the aquafaba and cream of tartar until it forms soft peaks (see photo below).  Add the vanilla.  Slowly add the sugar with the mixer running.  Mix until stiff peaks are formed.

Use a piping bag to create little swirls and shapes for the cookies.  If you don’t have a piping set, just scoop by teaspoons onto the baking sheet.  If you’re new to piping, set the bag in a tall container and fold it down so that you have both hands free to fill it.  As you can see, my piping skills need more practice.  Bake the cookies for 2 hours, then turn off the oven and leave them for another hour until totally hard and cool.

So, it looks like meringue, right?  Yes, the chickpea water whipped up beautifully and this recipe was easy.  However, it had a funky smell and it was just…. weird.  When I tasted the meringue before baking it had a salty, acidic, beanish flavor that I didn’t love.  I thought maybe it would go away during baking.  I didn’t tell my husband or son what these were made of and just let them taste the results.

They both noticed that something was different.  They couldn’t say what was different and still liked them, but frankly they just are not as good.  The texture of the finished product is a little different from egg white meringues.  These are more starchy?  I don’t know.  Vegan meringues are a cool thing to make and very easy, but why?  They make a great substitute and you probably wouldn’t notice the difference in certain applications where there’s a sauce or some other toppings.  But you know, a substitute just isn’t the same.